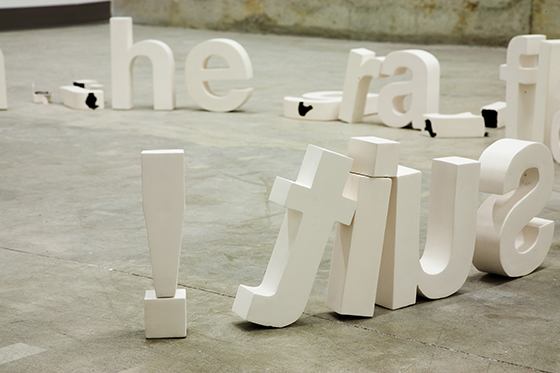 Solo Show: Nothing Rhymes with Orange

Project 4 is pleased to present, Nothing Rhymes with Orange, a solo exhibition of Los Angeles-based artist, Thomas Müller. This will be Thomas Müller’s third solo exhibit at Project 4.
Born in South Africa to Swiss and German parents, Thomas Müller became fluent in Afrikaans, Bantu, English, German, and Zulu. The experience of learning, interchanging, and later forgetting multiple dialects has greatly influenced Müller’s work. In, Nothing Rhymes with Orange, Müller presents sculptures and drawings that continue his exploration of language, its ambiguity and its transience.

By creating ceramic letterform sculptures, Müller materializes language, freeing it from the page and thrusting it into our environment. He transforms letters and phrases into objects, spelling out expressions such as “¡buenos dias!,” and “I am the man in the gray flannel suit!” in three dimensions on the gallery floor. Not accounting for gravity or a typographical baseline, if a letter is top-heavy or unbalanced, it can topple over and even break, exposing the internal space. The viewer must physically confront the letters; maneuvering around the sculpture, deciphering broken pieces, and simultaneously seeing and reading the forms.

By allowing the sculptures to break and shatter, Müller reveals the interior architecture of the letterforms. Curves, line, and color are revealed removing the contextual limitations of language and reducing it to pure form. Müller’s physical treatment of language calls attention to its inadequacies, its fragility, and ability to be misinterpreted. Through materializing language, Müller pushes it from the literal, to the physical, and then to the abstract.
Thomas Müller (b.1971 Cape Town, South Africa) earned his MFA from Cranbrook Academy of Art, Bloomfield Hills, Michigan and his BFA in Ceramics from the University of Washington, Seattle, Washington. Müller’s work has been featured in exhibitions throughout the US and abroad including shows at the Tacoma Art Museum, Tacoma, WA, the Torrance Art Museum, Torrance, CA, Fort Worth Contemporary Arts, Fort Worth, TX, Kristi Engle Gallery, Los Angeles, California, and the Artinus Gallery, Seoul, Korea. His work has been mentioned in publications such as Art in America, The Korea Times, the Phoenix New Times, LA Weekly, and Ceramics Monthly, among others. Müller currently lives and works in Los Angeles, California.

Click here to cancel reply.
The man in the gray flannel suit has fallen over!
Fundraiser