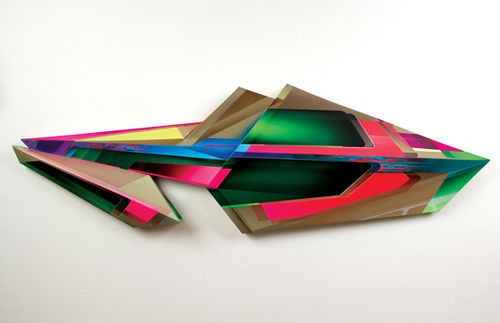 In July 1955, Disneyland debuted its Tomorrowland attraction to the public. The futuristic park-within-a-park was near and dear to Walt Disney himself, a product of his Space Age fascination, and featured such radical early exhibits as the TWA Moonliner rocket ship, Autopia and the Monsanto House of the Future, all conceived to give visitors a glimpse of what life might look like in the far-off year 1986. 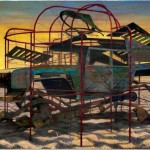 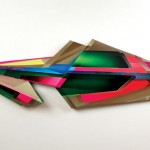 Now in its third iteration, Tomorrowland seems as outmoded to the non-Disneyfied as the idea of partying like it’s 1999. But for curator Samantha Fields, its premise provides fertile ground for interpretation in an eight-person group show currently on view at Cal State Northridge. Like its namesake, Fields’ “Tomorrowland” is forward-looking, yet in the hands of the participating artists — Lisa Adams, Libby Clarke, Daniel Dove, Trygve Faste, Sean Higgins, Kelly McLane, Thomas Müller and Klutch Stanaway — the future is not so much a gleaming biodome of innovation as a damaged landscape whose human inhabitants are scarcely visible.

Fields, an artist herself, says, “In my own work, dystopia has been an interest for a while, because it has a timeless quality. Our desire for a perfect society, a utopia, is universal, and dystopias are almost always utopias gone wrong.”

The artists she selected for “Tomorrowland” all explore, with varying degrees of pessimism, the idea that well-intentioned human progress just might leave behind a junkyard of misguided ambition.

Technology, for example, may be synonymous with advancement and interconnectedness today, but in “Tomorrowland,” Fields says, it’s presented as “something that can’t save us [and that] is no good if we aren’t there to operate it.” Dove’s Exploded View is one piece that speaks to this grim prediction: Though lushly rendered in oils, the painting’s rusted pickup truck trapped inside a long-neglected jungle gym introduces a milieu that Fields calls “sick and anemic, empty but for these husks.” Similarly, Fallen Lander, Stanaway’s indeterminate space rover, which appears to have plummeted back to Earth and shattered on the gallery floor, expresses “the potential of technology tinged with a sense of futility.”

Other artists in this exhibition focus on the precarious fate of the natural environment, fabricating scenes that may seem familiar until closer inspection reveals elements as yet unknown to us. Higgins’ Dark Days, Night Lights photograph shows a moonlit river — yet there’s no light source anywhere in the ink-black sky. The subject of Vulture, by Müller, teeters overhead on wooden beams, ready to attack easy pickings at the slightest provocation — but it’s not an actual bird, it’s the word “vulture” spelled out in sculpted Helvetica letters.

In Adams’ painting The Order of Entropy, an oval moon illuminates an unlikely burst of flowers from a wire-wrapped stump — a tableau the artist describes as a “collision between the natural world and the human-built environment. I love images of … nature’s reclamation of that scenario. The rage to live is so vivid in these instances, and produces a kind of dystopic paradise.”

McLane investigates a different type of renewal in the often-turbulent intersection of past and present (or present and future, as the case may be), referring to historical events as a framework for examining current conflicts. In her large-scale painting Queer, a carnival gone awry serves as the backdrop for a Native American slaughter overseen by Napoleon. Not only does the work intimate a self-perpetuating cycle of “the powerful eliminating the weak,” Fields says, but “it’s hard to look at the flooded circus tent and not think of the submerged roller coaster off the coast of New Jersey in the wake of Superstorm Sandy.”

All hope is not lost in “Tomorrowland,” though. Clarke (aka Monstress), for instance, provides a set of visual aids to happiness in a troubled society. Her Perspectiflex, a cardboard wheel with a spinning arrow that points the viewer toward possible explanations for other people’s aggravating actions, aims to “open your mind and lessen your feelings of displeasure.” And her Ardor Arbiter kit contains “citations” to be issued as either rewards or punishments for certain behaviors. These and Clarke’s other mood-regulating devices all point to better living through artistry.

It’s a lesson Faste has learned as well: He says his slick, ultra-abstract Turboform paintings are designed in part to draw attention to a “latent cultural desire that somehow the future will be more promising than the present.” As a designer, he uses technology to solve everyday problems, and he employs this same approach in his art, supplementing his traditional painting techniques with tools like 3-D modeling and rapid prototyping. The result is a series of deconstructed canvases that from some angles look like aftermarket Millennium Falcons with ’80s airbrushing, and from other viewpoints resemble a tangle of neon blocks and beams that could be paving a path to an undiscovered galaxy — if only we could figure out where to step first.

The Disneyland website proudly proclaims: “Here in Tomorrowland, the future is today!” The sentiment is not lost on Fields and the eclectic crew she’s enlisted to tease out her vision of what’s in store for us, but the new world that her “Tomorrowland” forecasts favors doom and gloom over blind faith. There are moments of optimism, to be sure, but this isn’t an amusement park — and in real life, well, it’s like Fields says: “The road to hell is paved with good intentions.”